If you are a business that produces an enormous amount of creative content, whether it be video or digital publications, or you are an architect who has to render large 3D images, the chances are that the bulk of you use an Apple platform a relationship that could be costing you not thousands but tens of thousands of dollars unnecessarily, because your creators or designers are simply in love with an Apple machines.

The answer to your cost-saving and performance increases could be the all-new Acer Concept D workstation or notebooks that perform equally as good as an Apple Mac Pro machine when running the exact same creative software whether it be Adobe’s Creative Suite or Autodesk CAD/CAM software.

Apple’s latest Mac Pro computer is now available for order in Australia but to get just the basic model, you are going to have to fork over a minimum of $10K to get an Apple 8-core processor, 32GB of RAM, and 8GB graphics card and 256GB of storage. 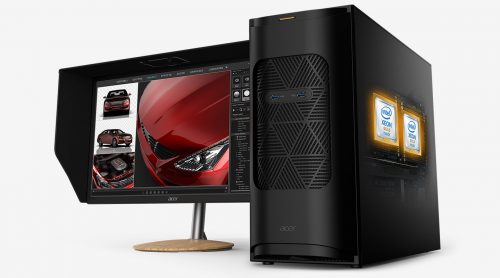 The new entry-level Acer Concept D 500 comes with up to two Intel Xeon Gold 6148. 8-core 16 thread processors and with up to 192 GB of DDR4 RAM It also has the all-new NVIDIA Quadro RTX 4000 GPU onboard, to deliver reliable computing performance for complex creative projects, the cost is $5,600 half the price of a Mac Pro with equal if not better processor credentials.

But if you need absolutely the most powerful Apple Mac Pro computer on offer, you’re going to need close to $100,000 and this is where it is going to get very tricky.

One solution could be to offer your creatives two Acer Concept D machines, a Concept D 500 workstation and a Concept D notebook instead of one brutally expensive Mac Pro workstation. Acer will even throw in wireless charging for an iPhone or Android device free with the Concept D workstation.

At this stage, I must claim that this review comes with a warning tread carefully because while you are in a position to save money and improve your profits as well as deliver great workflow with the new Concept D machines, Apple lovers are known to turn feral if someone dares to take away their precious Apple Mac Pro machines of which most are now long in the tooth because Apple has not bothered to upgrade these machines for several years.

While Acer has a mammoth task trying to enter the market of dual-processor workstations, which is lucrative, but rather small they have the bait to attract those who want value as well as performance.

I run a business that churns out thousands of pages of digital magazines, that include videos and interactive tours.

We also produce web sites and the cost of production is a crucial part of our operation.

I recently took delivery of an all-new Concept D 500 and when fired up and configured I was amazed at the speed and silent running especially as it has a lot of processor grunt under the bonnet.

We operate primarily in the cloud, running Office 365 apps, Dropbox for images and file storage, Adobe Creative Suite consisting of InDesign, Photoshop, and Illustrator, as well as web content tools, video editing and Asana for production management. We also still use Fireworks for quick online banners.

All this software loads equally as well to a Mac Pro as it does to the Concept D 500 which can easily be configured upwards at half the price of the Apple Mac Pro.

What you get with the Acer offering is cutting edge Xeons and Quadros and ECC memory that make a big difference to workflow over prior machines.

We have also just moved to a new 400Gbps fibre pipe to manage our creative workflow back and forth from the cloud.

What the NVIDIA Quadro RTX 40001 graphics cards deliver is the performance that’s needed for photorealistic 3D animation, AI-powered workflows and ultra-high-quality video. The first thing we noticed was the lack of lag and the smooth way in which images rendered.

Being able to pull up a 100-page publication in its raw form and not have to wait for pagers to load especially when the 100 pages have 200+ high res images embedded is a real test for the Concept D.

Another test came when I processed a 3D CAD drawing for a 3 level house, we are building with the new Concept D we were not only able to load and process the file but make quick changes on the fly and see the results instantly.

A lot of the key performance capabilities especially when it comes to intensive applications have been achieved because Acer has designed an architecture for the Concept D that is unique.

Intensive applications such as rendering, and video production will cause any processor and GPU to run hot and this often slows down a creative machine. Therefore, it’s essential that the cooling system delivers but with cooling especially with the new Apple Mac Pro’ there is a downside noise.

The ConceptD 500 has optimal thermal, ventilation, airflow dynamics and is cooled using three cooling fans to draw the air in through the triangular front air panel and circulating it throughout the chassis.

Unlike the Apple machine the Concept D noise level is only 40dB which still quite enough to be unobtrusive, in fact, the machine is so quiet that I cannot hear it at all.

And because Acer is entering a market that is virtually controlled by Apple, they have had to seek out third party endorsement that their new creative machines deliver.

To meet the demands of engineers, architects, videographers, cinematographers, 3D animators, AI professionals their Concept D machines have been tested and certified by Independent Software Vendors (ISVs) to make sure that they meet the highest level of performance.

Adobe, PTC and Altair, as well as Keyshot and CREO, have given the machines the thumbs up.

As for display monitors, Acer doesn’t charge $400 just to get a base for a third-party display screen.

Besides, both carry VESA’s DisplayHDR 1000 badge, thus offering a peak brightness of 1000 nits and supporting at least one HDR transport.

The bigger 32-inch CM7321K is a 4K LCD that uses a Mini LED-based FALD backlighting with 1152 local dimming zones and thus delivering an ultimate contrast ratio. Being aimed primarily at DCC specialists, the monitor covers 89.5% of the Rec.2020 colour space.

These screens are ideal for organizations who want cutting edge colour accuracy.

Under the bonnet, the Concept D machines deliver equally as good as the new Apple Mac Pro.

The massive difference is the price, half of what you pay for an Apple machine to do the same job. For a business, this is a massive price difference and one that any business must take seriously.

While the choice may be IOS from Apple Vs Windows 10 from Microsoft the cost of owning several machines Vs one is a big consideration for any business owner.

I for one cannot find any reason for supporting an Apple Mac Pro machine Vs the Concept D other than ego and vanity which is often associated with people who want to say I work on an Apple Mac Book Pro.

Like the Apple Mac Pro, the Acer machines consist of a lot of third party components from the likes of Intel and Nvidia and while Apple makes the most of their money flogging iPhones and Watches Acer makes the built of their revenue selling PC’s and the world’s #1 Predator gaming machines.

PC performance is at the core of what Acer does which is why I am saying its time to change platforms and cut costs.