ASUS who are desperate to be taken seriously as a PC brand in Australia have used Computex in Taiwan to reveal a gaming phone with a removable fan, and a dual-screen laptop.

The Company is also trying to get traction for their Republic of Gamers brand in an effort to compete up against Acer, Lenovo, Dell, HP and MSI.

Their new gaming handset comes with a clip-on fan to keep it cool during “strenuous gaming sessions”.

Asus’s gaming phone is the first Android-powered smartphone to be produced under the Republic of Gamers brand.

Its screen is capable of displaying 90 frames per second (fps) – more than regular phones – to make games play more smoothly. 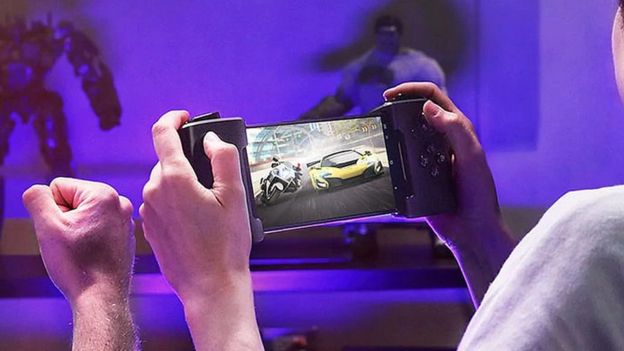 There is also a range of accessories, including clip-on controllers that are vaguely reminiscent of the Nintendo Switch console claims the BBC.

The Verge said it was the “highest-specced Android phone ever”, although there are not many games available on Android that take full advantage of the souped-up hardware.

Another big attraction at the Taiwanese show was a concept dual-screen ASUS laptop which was a newer version of the old ThinkPad W701ds and the Acer Iconia 6120.

Asus’s Project Precog is built around a bendback 2-in-1 that Asus Head of Marketing Marcel Campos showed on stage at Computex 2018.

Project Precog uses the power of artificial intelligence and deep software integration to take full advantage of its two, full-size displays. Campos explained that, thanks to an on-board Intel Movidius-powered camera, the system knows exactly where you place your hands and can make a virtual keyboard appear appear right under your fingers.

He showed a series of screenshots, detailing how Project Precog can be used. If you launch an office app like Excel, you can see your spreadsheet on the top screen and Microsoft’s chart suggestions on the bottom screen, just above your virtual keyboard. The system also knows that, if you’re using it with an external keyboard and move the keyboard away, that you’ll need the virtual keys.

ASUS showed how you can do serious work on the top screen while watching videos and chat windows on the bottom one. Because the screens can bend back a full 360 degrees, Campos explained that you can use it like a book with two pages showing in landscape mode or lay it flat on a table and play a game with the person sitting across from you.

Details about the hardware were scarce.