According to Michael Tapp the General Manager at Homedics the distributor of House Of Marley, Sol Republic and Jam sound gear Australia is set to get several new products from the three brands in 2019.

The sustainability-minded audio brand House of Marley are set to deliver a mix of low cost head phones that still have timber on the sides as well as new in ear buds.

“This year, we are taking our signature eco-conscious and recyclable materials and incorporating them into a number of brand firsts, from smart speaker technology and true wireless earbuds to our new flagship over-ear performance headphones,” said Tapp at CES.

We have had a great year in Australia Jam has gone well and consumers lover the sustainability values that the House of Marley deliver.

One of the new products to be released is The House Of Marley’s first ever pair of true wireless earbuds.

Called the Liberate Air, the new headphones will feature seven hours of battery life and are IPX4 rated for sweat and water resistance. Bluetooth 5.0 and touch controls are built into the headphones, providing what should be great stability and ease of use. They will retail for around $229 in Australia and will be available the second half of the year. 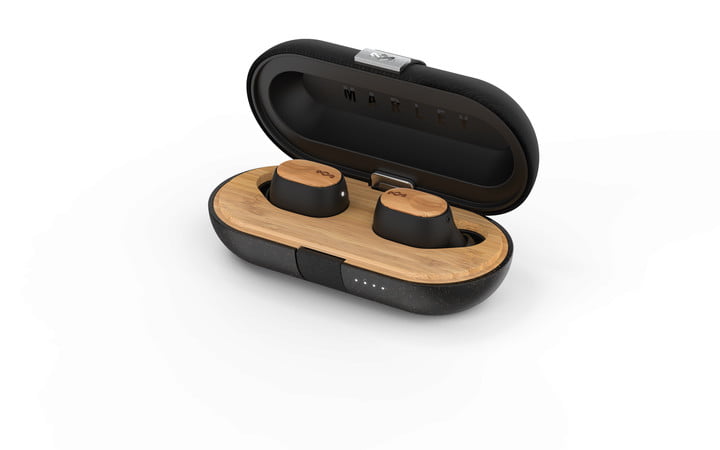 Also appearing for the first time at CES is the company’s new Get Together Mini, a small Bluetooth- and Wi-Fi-capable speaker made of bamboo and recycled aluminium that will feature Google Assistant and Google Cast built-in. This means that it can now serve as a small multiroom speaker for those who want a sustainable listening option. It will retail for around $299 and will be launched late in 2019.

The company has also announced a new pair of over-ear noise-cancelling headphones called the Exodus that are aimed at giving more budget (and environmentally conscious) listeners an alternative to industry leaders like the Sony WH-1000xM3. They feature bamboo earcups and large 50mm dynamic drivers, and — best of all — a massive 30 hours of battery life for listening on the go. That means you’ll easily be able to make it through your next long journey without having to stop and charge your headphones.

Jam has been a major success at JB Hi Fi and the new range launched at CES 2019 is set to further expand the brands presence in Australia.

Among the new offering will be a new line-up of over a dozen wireless headphones and Bluetooth speakers as well as a Jam record player.

One new product is the sweat resistant (IPX4) Live Free true wireless earbuds which deliver a precise, secure fit and allow for compact portability for even the most active user.

As JAM’s smallest and lightest true wireless earbuds to date, the Live Free are engineered for unparalleled sound quality. A full charge offers 6 hours playtime, twice that of its predecessor, and an additional 72 hours within the compact charging case. They are tipped to sell for sub $100.

A Spun Out Bluetooth turntable is new to the JAM family. Spun Out delivers all the modern features you need to rediscover your classic records.

It seamlessly connects to any Bluetooth speaker or headphone through its integrated transmitter rather than only offering playback through an embedded speaker and receiver.