Voice, Voice, Voice technology, was the biggest noise at CES 2018, as Google battle it out with Amazon Alexa and Samsung tries to get a seat at the table with their Bixby offering which will see the launch of a new AKG Bixby speaker in Australia in the second half of the year.

Australia has gone against the trend when it comes to voice activation, unlike the USA or Europe Google has the upper hand over Amazon’s Alexa for the simple reason that they were able to get in first.

According to Google executives at CES Australia is one of the strongest markets in the world for the big search Company who is set to see their technology popping up this year in just about everything that can house a processor.

At CES, we saw Smart TVs, cars, pianos – and even a toilet that has a voice chip built in. There was even an umbrella shade that be controlled by Alexa voice. 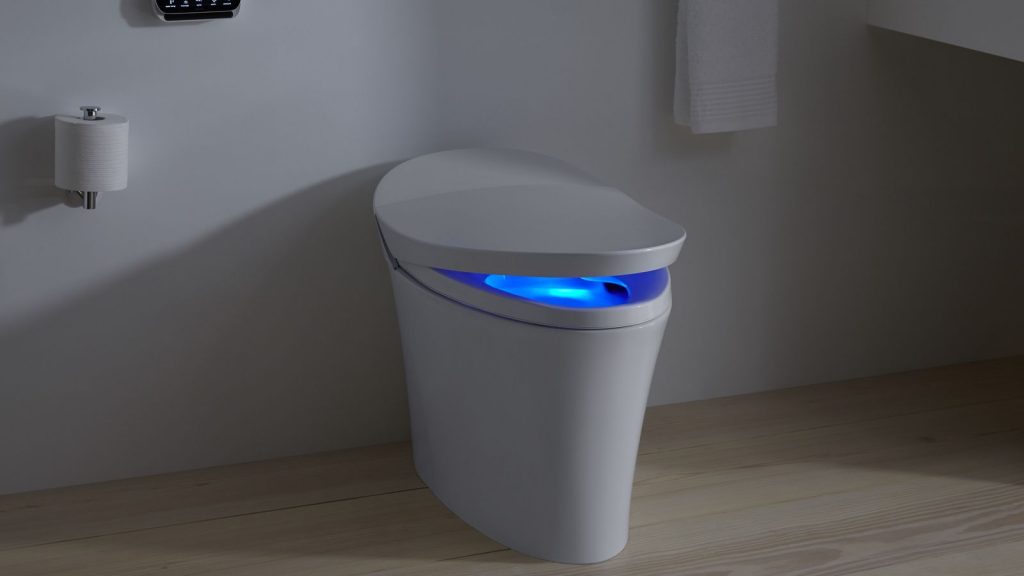 Kohl voice activated toilet seat. My wife will love it.

In the USA Amazon Alexa has over 60% of the voice market and this is creating problems for several brands selling products in Australia.
For example, Netgear has a new Orbi Alexa speaker coming that is already on sale in the USA, at this stage it is not available with Google Voice.

Amazon has also made it hassle-free to add Alexa to products, by offering the assistant on a single chip – the Alexa Connect Kit.

It has been available for a few months now, but at CES Google just announced their equivalent tool with a strikingly similar name – Google Assistant Connect.

However, any product using that chip will have to wirelessly connect to a Google smart device, which will process voice data.

What we have found when testing devices from Lenovo, JBL and other brands is that Google Assistant, tends to be better at answering queries about the wider world than Alexa.

It also has exclusive access to some of the search firm’s other products, letting users control Chromecast audio streams or display YouTube and Google Maps on devices with screens.

Alexa, by contrast, is more widely supported by third-party products and has more apps.

Sonos is a USA Company who to date has not released a Google Assistant speaker in Australia.

Recently they showed retailers a prototype smart speaker that allows users to select either Alexa or Google Assistant, though it isn’t possible to activate them both at the same time.

Part of the problem is that interacting with multiple virtual helpers through one device could get confusing. However, brands such as LG in Australia are building dual Alexa and Google into their 2019 TV’s that will be sold in Australia.

Bixby
One Company that is not giving up on trying to establish a proprietary voice activation system in Australia is Samsung. They want Samsung customers to buy a new Bixby powered AKG speaker later this year and control their Samsung devices from fridge to washing machine to TV using Bixby.

At CES 2019 the Company said that they are adding more content partners to its Bixby voice assistant, including the Google products like Google Maps and YouTube.

The South Korean company also announced that it is going to integrate Bixby in more of its products including their 2019 QLED and premium TV line-ups.

Among other Bixby-related developments, Google is bringing support for several of its products to the voice assistant including Gmail, YouTube, Google Play, and Google Maps.

Samsung’s 2019 Smart TVs will now support Google Assistant via Assistant-powered hardware like Google Home, a third-party smart speaker, or smart display. They will also be compatible with Amazon Alexa.

The inclusion of Google products will certainly give Bixby a bit of legitimacy, considering it has having a hard time competing with the more established players like Amazon’s Alexa and Google’s own Assistant.

Samsung Bixby was originally introduced for the company’s mobile devices, but has since moved to other platforms, including smart speakers.

At this stage Amazon is estimated to have 41% of the global smart speaker market while Google comes in second, taking 28%.

At CES 2018 and 2019, Google and Amazon have both deployed small armies of promoters to answer questions about their products with more manufacturers now building in dual capability into devices.

In Australia analysts believe that Google has the upper hand and will grow their share of the market however you cannot write off Amazon and their Alexa offering.

Netgear To Get Into Art Business In OZ