All four devices will reportedly land in Australia from January 2020, with options to suit different customer preferences. Pricing is yet to be confirmed.

Battery life varies from 10 hours to around 12.5 hours.

Google Play is supported in the entire range, with built-in Google Assistant, and powered by either dual-core Intel Celeron N4000 chips or quad-core Celeron N4100 processors.

The Acer Chromebook 315 has the option for an Intel Pentium Silver N5000 processor.

“Chromebooks have moved far beyond their original promise of getting computer users online in a quick, secure and easy-to-manage way, now allowing customers to access apps that help with every aspect of their day from budgeting, staying in touch, having fun and taking care of life’s business,” claims James Lin, General Manager – Acer Notebook Business. 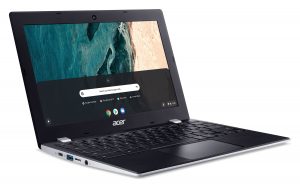 “Today we’re offering four new Chromebooks in three sizes, so consumers can get the right Acer Chromebook with the display size, features and technology that fits their lifestyle needs.”

The larger Acer Chromebook 315 and 314 offer Full HD resolution, IPS technology for wide-angle viewing, and a numerical keypad for the Chromebook 315.

Touch-screen and non-touch screen models are available in the new range.

The Chromebook Spin 311 incorporates a 360-degree convertible design, and can perform as either a notebook or tablet, is compatible with a Wacom stylus, and weighs just 1.2kg.