Samsung’s new premium of premium, Galaxy Note 20 smartphones, are a powerhouse that will also come with Xbox gaming built in and a new ultra-fast stylus as well as 8K Video shooting capability.

Set to be revealed officially on August the 5th we can now reveal that there will be two Note 20 models in the range including a standard Note 20 and Note 20 Ultra with both models featuring the latest 5G chipsets, gone is the 100X zoom found in the current model Galaxy 20, this has been replaced with a 50X zoom and an 8K video recording capability.

Both of the main cameras will support 8K video recording capturing approximately 8,000 pixels per frame.

The Note 20 Ultra will also be the first smartphone in the world to come with the chemically strengthened Gorilla Glass 7 from US firm Corning this is said to withstand a drop from shoulder height.

The big difference with these new models is that they both support 5G and stream Xbox games over the cloud in an expansion of Samsung’s relationship with Microsoft who is also bundling their Office 365 apps and automatic synchronisation with OneNote, Microsoft’s note-taking software.

Optimised for game streaming via the use of the Xbox Game Pass, Microsoft’s video game subscription service it’s not known at this stage how many games will be available however a leaked document reveals that there could be more than 90 games available via the cloud, making the Galaxy Note 20 a ‘portable game console’.

The cheaper ‘standard’ Galaxy Note 20, will be available with or without 5G support.

The Galaxy Note 20 Ultra will have dimensions of 16.25 centimetres by 7.62 centimetres

Also built in is an ultrasonic fingerprint reader, similar to the on screen one already used in the S20 series.

The standard Note 20 uses a 12-megapixel sensor, while the Ultra, has an improved 108-megapixel camera with laser auto focus and five times the optical zoom.

Three camera sensors on the back should enable a 30-fold and 50-fold ‘space zoom’ on the standard and Ultra models, receptively. 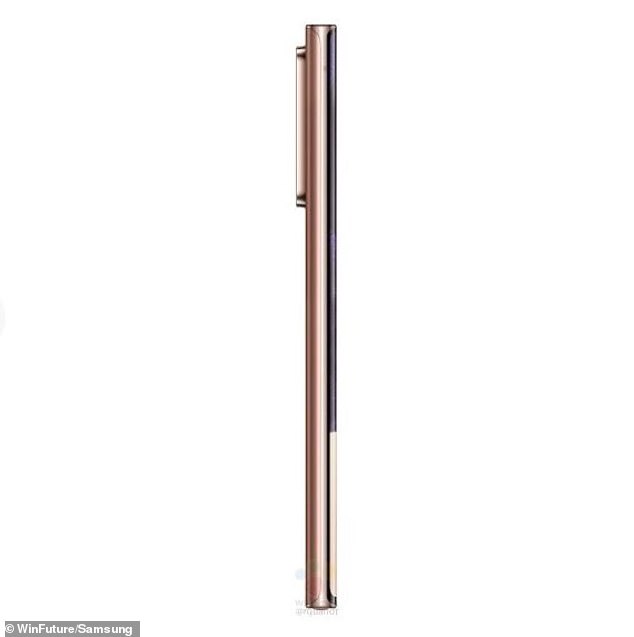 The ‘space zoom’ feature on the previously released Galaxy S20 Ultra allowed users to zoom in up to 100 times while maintaining a high-quality resolution.

Both models reportedly have dual SIM support and are IP68-certified for 30 minutes in water at a depth of 1.5 metres.

The Note 20 standard is fixed with a 4300mAh battery and Ultra comes with a 4500 mAh battery – both of which can be charged wirelessly and charged to 50 per cent of their capacity in 30 minutes.

Australian Pricing has not been announced yet with the Ultra tipped be close to $2K.