When MSI first announced the Prestige 15 laptop, it was promoted as the world’s first machine with a 10th gen Intel 6-core incorporated processor made especially for content creators.

Stepping away from gaming, Charles Chiang, MSI’s global CEO said the company is about more than just video games, but about adaptable solutions for users to help ‘foster and unleash their creativity’.

The question to be answered is, does the MSI Prestige 15 Content Creator Laptop ‘foster and unleash’ my creativity?

As a tech journalist, this is not always an easy thing to determine, as with many content creation focus products, the term ‘content creation’ applies to so many different fields and industries that it tends to be more of catchall moniker rather than the product specification.

That being said, considering MSI’s pedigree when it comes to gaming products, devices and peripherals, it makes sense to include the term ‘content creation’ for its branding, so as not to confuse customers.

Unveiled in August, MSI pledged the Prestige 15 as able to offer up to 40% faster photo editing and rendering performance, lag-free performance in 2D and 3D software, as well as better caching between multiple programs.

To find out whether or not MSI has kept its promise, we had to put the Presitge 15 through its paces.

For me personally, the biggest benefit from the MSI Prestige 15 content creator laptop has been its performance in multitasking.

Not once did the laptop skip a beat when launching or switching between programs, transferring files back and forth, or during intensive web browsing; journalists tend to have an exponential amount of tabs open at once.

Boot times were measured in seconds, and I heard barely any noise from the internal fans, other than during large file transfers and processing.

This is thanks to the Cooler Boost 3 ULTRA SLIM cooling solution by MSI which consists of enhanced fans and up to three heat pipes for improved heat distribution.

Overall, day to day use has been phenomenal, performing without any hiccups which is exactly where the MSI Prestige 15 Content Creator Laptop is meant to shine.

As outlined by Mr Chiang, the MSI Prestige 15, ’embody [MSI’s] ideals by giving content creators industry-leading tech and features that speak to their needs’.

To determine that we had to put the computer through the wringer with a PCMark 10 performance standard test which revealed a score of 4628, better than 51% of all results when it came to essentials, productivity and digital content creation.

In digital content creation, the MSI Prestige 15 scored a 4740, which is well above requirements for creatives according to PCMark 10.

Moving onto the design of the MSI Prestige 15 Content Creator Laptop, I was pleasantly surprised with the quality of the keyboard, with full backlighting and a complete array of media controls.

Keystrokes felt clicky and responsive, without the dreaded mushiness that can come from typical laptop keyboards, however coming from mechanical keyboard use, the actuation travel time of the membrane switches took a little getting used to.

The included trackpad was responsive and easy to use, though as with many PC trackpads, it still pales in comparison to the benchmark set by the Apple Macbook Pro.

Though being roughly $1000 cheaper than a 15-inch Macbook Pro, this may be where all the extra R&D expenses go to at Apple Inc.

Included in the trackpad is a fingerprint scanner, which was just as responsive as any other scanner, meaning you’re not always guaranteed to get a perfect reading every time, despite the added security it can bring.

However, thanks to Windows Hello functionality, seamless security can be achieved. 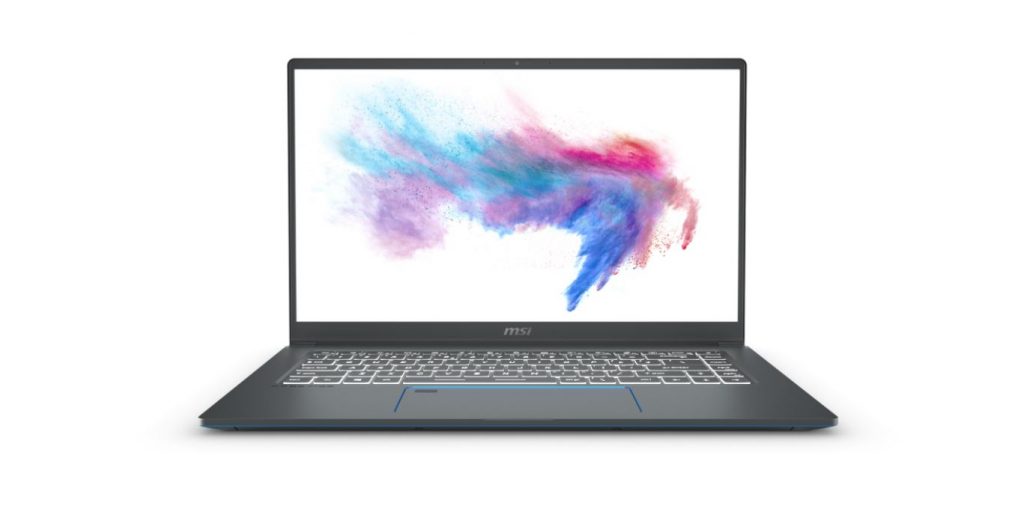 Why MSI decided to go with a MicroSD card reader is unclear, seeing as how a majority of creatives work with either regular-sized SD cards or capture flashcards, the micro port will really only be useful to those using compact cameras such as GoPro.

While I’ve not had to take the laptop out and about with me, MSI does promise 16 hours of use for on-the-go users, and at only 1.6kg in weight, its no trouble carrying it in hand.

Coming in a Carbon Gray finish with a thin-bezel 15.6-inch 4K UHD display, the MSI Prestige 15 is sure to delight video and photo editors, with access to 100% of the AdobeRGB colour space.

Powering all that functionality is the latest GeForce GTX 16 Series Graphics with 4GB of onboard graphical memory.

Paired with a maximum of 64GB of memory, the laptop cut through video renders and photo exports like a knife through butter.

MSI is aiming to capture some of the burgeoning ‘content creator’ market, which has recently been identified by PC vendors as a significant growth area, with the CAD software market, currently dominated by Apple Macs, of particular interest.

The dedicated content creation 10th-gen processor shines through in the MSI Prestige 15, with the performance that continues throughout the workday and beyond.

Available now from JB Hi-Fi for $2699, the MSI Prestige 15 Content Creator Laptop is a quality product, with terrific value, a professional aesthetic, and performance that will have you producing content like nobody’s business.