One of the biggest smartphone markets in Australia is the affordable premium market ranging in price between $500 and $750 dollars which is why brands are fighting for share in this space.

Now TCL the big global TV brand and the Company that makes Australia’s #3 smartphone has rolled out a serious new contender that despite being sub $500 is packed with features normally reserved for more expensive models. 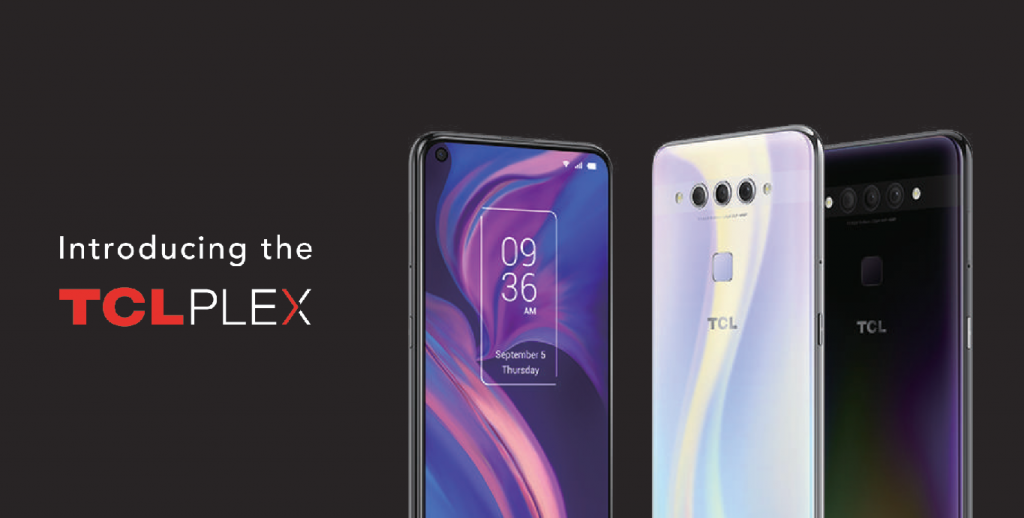 TCL realised that they had to deliver when it comes to quality, design and above all specs and performance if they had any chance of breaking into the premium market in Australia.
The phone has a glass back and impressive specs, which immediately flags the device as a contender in the premium market but it’s under the bonnet that counts and this is where the TCL Plex excels.

At IFA in Berlin I played with an Opal While version, it was very stylish with its shimmering colour gradient and while the device is new it’s sure to create a stir in the market.

The Plex is also available in Obsidian Black. There’s a USB-C port at the bottom for recharging and a single bottom-pointed speaker (We will address sound later).

TCL Mobile unlike several of their competitor’s products actually manufactures the new TCL Plex on their own production lines which are used by other major smartphone brands to manufacture their devices.
The Plex is running Android 9.0 and has a unique and highly practical UI that delivers additional set up capabilities, so is there a difference between the Oppo Reno at $999 and the new Plex, the answer is very little and definitely not $500 worth of difference.

After a quick look, you suddenly realise that this device has excellent credentials to be a contender with their 48MP f/1.8 main lens, a 16MP f/2.4 ultra-wide lens with a 123-degree field of view, and a 2MP f/1.8 slow-motion video camera capable of capturing up to 960fps in HD. These are top-end specs that deliver beautiful sharp photographs.

It also comes with 6GB of RAM and 128GB of storage, as well as an impressively large 3,820mAh battery and an equally capable Qualcomm Snapdragon 675 chipset, which is the power plant powering the Google Pixel which is selling for $799.
So how does this device stack up? This is an exciting smartphone that in the hand feels as good as a top-end Apple or Samsung smartphone, running the Android 9 OS.

TCL has introduced some unique set up features such as asking whether you use a device in your left or right hand, to me being left-handed this is a valuable feature.

I also like the fact that the fingerprint scanner which is super-fast to set up is located on the back of the device similar to the $1,800 LG premium V50 smartphone.

Another setup feature that you won’t find on top-end Samsung or Apple devices is a prompt when setting up to optimise the display. You have to remember that this is a Company that excels when it comes to displaying which is why they are the #1 TV brand in the USA.

With the Plex, TCL has introduced NTX Vision and the prompt allows you to set up the display for gaming or multimedia entertainment. You can also set your display to Vivid or Standard as well as adjust for ambient lighting without having to go to the settings menu.

You can also set up SDR To High Definition Range (HDR) which does make a difference to the viewing experience.
On the left side of the device is a button that instantly activates Google Voice Assistant, it’s fast and responsive.

The display has been calibrated to be very accurate, using deltaE measurement, so what does this mean.

Delta E is a metric for understanding how the human eye perceives the colour difference. The term delta comes from mathematics, meaning change in a variable or function. … On a typical scale, the Delta E value will range from 0 to 100

This calibration and the built-in Pixelworks based processor manages display output to upconvert all SDR content (most of it) into HDR high-resolution content.

This setting is adjustable in the options, but the idea is to improve the visual fidelity of the majority of content (video, games, pictures) on the smartphone.

The exact phrasing ‘to be truer to life’ We have seen this before in tablets, but this might be the first time we have seen Pixelworks hardware incorporated into a smartphone that’s sub $500.

Camera
2019 is the year of rear triple-lens (main, ultra-wide, telephoto) camera setups, but instead of a zoom lens, TCL’s phone has a slow-mo video shooter which is a smart move as it delivers a uniqueness not found in other cameras. The cameras are located in a clean horizontal strip with the three horizontally-aligned lenses running down the centre, with a fingerprint sensor located on the top half of the device making it easy to reach.

As for the camera system, the front-facing camera is a 24MP OmniVision OV24B with 0.9-micron pixels and an f/2.0 aperture. It has a 78.2-degree field of vision, supports 1080p30 video, and has Portrait mode as part of the package.

The 2MP Omnivision OV02K does this with 2.9-micron pixels, allowing for more light per pixel. On either side of the rear camera are single-tone LED flashes, designed to help illuminate scenes not covered by the night-vision camera.

The quality of both still images and video’s shot with the Plex are good and are hard to differentiate from images shot on a more expensive smartphone or even a compact camera. The Plex’s front-facing 24MP f/2.8 camera takes good and above all sharp images at a higher megapixel than expected for a budget phone which is why the image is so good.

You will see from these shots the quality of the camera when it comes to detail. Note the fine blonde hair of the doll.

Note the details in the colour variation of the tree leaves. You can see the difference

TCL has opted for a punch-hole in the top left corner for the front selfie camera, which extends the screen-to-body ratio to 90%, which is better than most mid-range phones.
I am left-handed and the punch hole is on the bottom left when I first went to shoot a selfie horizontally, I accidentally covered the camera with my thumb.

Another big plus is that the Plex can be used to control a TCL smart TV or a Falcon TV which is made by TCL and sold exclusively by JB Hi-Fi.

This built-in software allows you to use the phone as a remote as well as being able to cast content, including standard media (videos, photos, and music) direct to a TV screen. This is similar to the capabilities found in the $1,800 Samsung Galaxy Note or Galaxy 5G smartphone.
Sound
When it comes to Sound the Plex is unique with TCL building in a Super Bluetooth connector that allows 4 individuals to connect to a 24-bit audio stream.
The concept of audio sharing was first introduced by Apple as part of its iOS 13 updates. But unlike Apple who will only support products that Apple is making money from such as Beats headphones, TCL has made audio sharing an open platform so that any make of headphone can be paired.

Conclusion
The reason for buying this device is simple, it gets all the basics right and it has top-end capabilities for under $500.

It’s also made by TCL a Company, that has an excellent pedigree in the manufacture of premium and value smartphones as well high-end display systems & TV’s, even JB Hi-Fi turned to this global business to build their new Falcon TV’s.

The new Plex is packed with all the right capabilities such as a powerful suite of camera options and highly practical software for managing your display and connectivity to a TV. It also looks good and is well designed making it a serious contender in the value premium smartphone market.