Known as the ‘Apple of China’, parent company Xiaomi has taken on the vacuum king, with the launch of Roidmi’s F8 Storm – claimed to be the world’s first “smart app cordless vaccum cleaner”, with Dyson-esque performance for around half the price.

Consumers can choose from a range of pre-sale packages, afterwhich the product will revert to its standard price of around USD $399 (including shipping). For Australians, this equates to around A$540 which is notably less than $899 for the Dyson Cylone V10 Animal or V8 Absolute. (Pst – I’ve seen brand new unboxed models being sold on eBay Australia for $459 with free shipping).

To be clear, this isn’t an early stage testing product. Impressively, the Roidmi F8 Storm has already won Red Dot and iF Design Awards.

Roidmi makes a point of emphasising the F8 Storm’s lightweight design. As a rather petite female with comparatively lacking arm strength, heavy stick vacuums are a huge gripe of mine.

The F8 Storm is largely as it claims – lightweight and not overly bulky. This makes it great for ceiling/high cleaning.

Unboxing the device, the first thing you notice is it’s futuristic design.

With a primarily white body, the device appears modern, space-age, and instantly contrasts the majority of stick vacuums on the market. It doesn’t appear [or feel] cheap, and though lightweight, is still sturdy.

The device features a rotating red roller brush in the head, which is similar to the technology found in Dyson’s stick vacs. The ‘felt’ nature of the fabric makes it perfect for our apartment’s wooden floors.

The F8 Storm ships with several attachments, most of them the usual assortment found with cordless/stick vacuums (e.g. extra brushes, heads, filters). 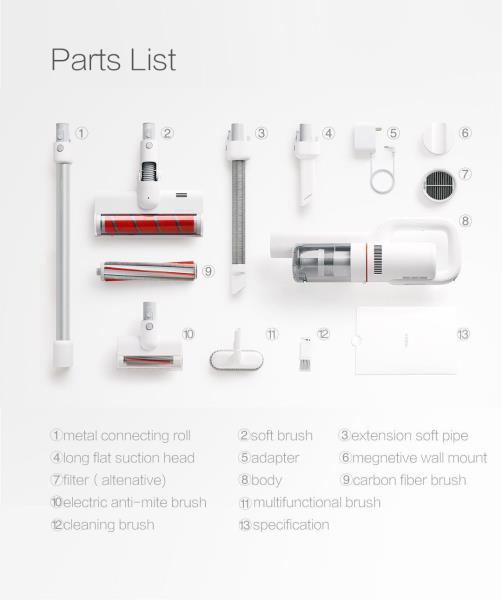 Unfortunately, the vacuum does ship with an international power plug, however, a compatible high-power travel adapter easily addresses this. I didn’t find it to impair performance.

If it’s any consolation, the device comes with a pretty spiffy instruction manual (with coloured pictures) making it easy for the average consumer. (Other brands, take note).

Like similar rival devices, the F8 Storm easily converts into a handheld vaccum (for cleaning sofas/mattresses) if you remove the main body ‘stick’.

A magnetic wall mount is also included, which neatly keeps the power cord in place when charging. Unfortunately, as we’re renters I couldn’t trial the sturdiness of this, however, it looks satisfactory.

Probably my favourite feature on the F8 Storm is its in-built LED light. It’s a ‘bluish’ light which stems from the device’s head, and illuminates the floor you’re vacuuming. Perfect for dark corners, while adding a luxe element to an ordinary stick vac.

A more useful, but equally cool, feature is the vacuum’s battery light indicator. The F8 Storm claims to offer 55 minutes on standard power, or 10 minutes on turbo/”strong” power.

There are four small white lights on the unit, and as the battery deterioates lights go out, one by one. When the device gets to the last light, out of habit I generally put it to charge straight after.

Being four lights, its extremely handy to know what percentage of battery life remains, out of a total of nearly one hour’s capacity.

(There is a fifth light, but this is to inform when the dustbin is full, or when the vacuum is connected to the Mi Home app).

Concerning maintenance, Roidmi has made this very easy. The 0.4L dustbin is simple to empty (essentially one click), and the HEPA filter is easy to remove, plus washable. Like other devices, a series of included accessories (e.g. cleaning brush) make maintenance easier.

Overall, it’s a great design, one I can’t really flaw at this price point. It’s unique, functional and easy to use. Some may crave a thinner head, however, I’d warn this may reduce its hair sucking/snagging power, which is incredibly important to me (long hair alert).

As mentioned, Roidmi asserts the F8 Storm lasts around 55 minutes (standard mode) on a single charge – a claim I’d say is largely substantiated. Usage drops to around 10 minutes if the ‘turbo’/’cyclone’/’strong’ suction mode is turned on.

Concerning power, the F8 Storm is robust and performs as claims. It’s not a subpar vacuum, nor does it underperform. Having used Dyson’s variants before, I would state suction power is somewhat similar.

Hair picks up easy – despite a lack of pronounced ‘prongs’ – as does general debris and crumbs. As we’re an adult household, no major messes are usually made. The vac more than satisfactorily catered to our daily lifestyle.

The F8 Storm features a ‘brushless motor’, capable of 100,000 rotations per minute.

It’s important to note the F8 Storm is a stick vaccum. These products are generally not designed to totally eradicate the need for traditional heavy-duty home vacuums. Battery life and suction power do not render this feasible.

Like its rivals, the F8 Storm is a powerful stick vacuum which caters best to small everyday cleans in certain areas, or ‘whole home cleans’ for small apartments (e.g. ours).

(On a recent press trip, a senior Samsung executive forecast in the next three years the average Australian house will have 2 – 3 vacuums; a stick vacuum, traditional heavy-duty vacuum and potentially a robovac).

Using the F8 Storm, our apartment could generally be vacuumed in one go using standard suction mode.

The difference between standard and ‘strong’/’turbo’ is noticeable, but it’s not to the point where you find the vacuum only performs decently on turbo. This would not be ideal, with only about ten minutes usage from a single charge.

Personally, I do a ‘whole apartment’ vacuum in standard mode, and then turn on turbo for certain sections which really need it (e.g. some pretty messy kitchen corners).

Roidmi states charging to 100% battery life takes around 2.5 hours. If you’re using a good high-performance travel adapter, this is largely substantiated (the device ships with an international power plug).

It’s important to note, you can’t use the vacuum when charging. This means if your’re ever in a fix, and need to clean with zero battery, you’ll be left stranded.

Concerning movement, the F8 Storm is definitely flexible. It’s not restricted to up/down motion only, and does offer diagonal movement, much more so than other stick vacuums. Overall, it’s a pleasure to use especially at this price point.

I will say, compared to some of Dyson’s higher end variants, the amount of movement the F8 Storm offers is somewhat less. But, this is not enought to render it subpar. It’s just a touch less flexible.

As mentioned, the LED head light is a great feature and I appreciate the fact it’s presence does not reduce battery life.

One of my favourite features concern the F8 Storm’s comparative lack of noise. It definitely has a ‘vacuum sound’ but truthfully, it’s not as loud as many others. As someone with sensitive ears, it’s a welcome bonus, and suits the vac’s  ‘premium looking’ aesthetic.

You can receive notifications when the vacuum’s dustbin is full, or if it’s time to replace the filter. The later is more useful to me, as the transparent dustbin needing a change is fairly visible.

Other statistical information is provided in the app – e.g. how much time you used the device in ‘standard mode’ versus ‘strong mode’, the amount of space cleaned in square metres.

It’s nifty and useful data, and probably makes strides in the consumer tech world, but personally it’s not an aspect I interact with a lot.

After using the product for nearly a month, I can confirm I didn’t see a reduction in suction power or battery life.

It’s a good start, however, true strength lies in long-term use, with many consumers critiquing the longevity of their stick vac’s motor and battery with time.

Despite some pretty bold marketing claims, the Roidmi F8 Storm is certainly a modern and robust cordless vacuum cleaner.

I have to commend the Chinese company for developing something which matches market leading performance, and is both attractive and ‘premium looking’, at an affordable price.

Instead of producing a Dyson copycat, Roidmi opted to go above and beyond, delploying additional features such as an LED light, and bluetooth/app integration.

The more you look at the device (especially when cleaning internal components), the more you realise careful attention has been paid to almost every section. Hinges, corners and just the overall build of the vaccum is strong, and  well crafted.

In contrast to some stereotypes, this isn’t a case of a cheap Chinese knock-off – instead it appears to be a glimpse into the future.

I’d have little hesitation recommending the Roidmi F8 Storm to consumers, especially those looking for a great product at a super competitive price.

The analyst within me also questions whether similar entrants may force other big brands to slowly start dropping their prices. Only time will tell.