The telco is touting the Galaxy S10 5G (256GB) on its XL consumer and business lease plans for $144/month (24 months, min cost $3,345) accompanying 160GB of data plus ‘Peace of Mind Data’ (no excess data charges in Australia) or shareable data, with a slew of Telstra sports, music and Wi-Fi data inclusions.

Whilst the device will accompany other plans, Telstra is marketing the above offer as its “Hero Plan” for the Galaxy S10 5G.

Considered a world-first, Telstra customers who purchased a Galaxy S10 Plus during the eligibility period early this year will also gain a free upgrade to the Galaxy S10 5G.

Customers will have 21 days from May 28 to redeem the offer.

Despite its name, the Galaxy S10 5G is more than an internal upgrade, boasting six cameras, a 4,500 mAh battery with super fast charging, and a 6.7-inch screen.

Telstra has committed to expanding its 5G coverage “on a daily basis”, with details on anticipated coverage in Australia by June 2019 available here.

Showcased during its launch event in Sydney today, the Samsung Galaxy S10 5G was able to notch an upload speed of 1.2Gbps on the Telstra network.

Despite this, some commentators question typical speeds available to most consumers nationwide during the initial launch phase.

“Australians will be amongst the first in the world to experience the power of 5G as this is the third country globally where Samsung has launched the Galaxy S10 5G,” adds Samsung VP Mobile Division, Garry McGregor. 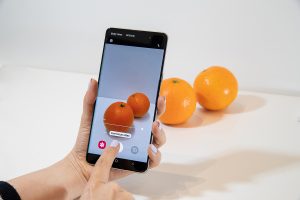 “We have started rolling out 5G in 10 cities around Australia,” adds Mr Teoh.

“Over the next 12 months or so we expect our 5G coverage to increase in area almost five-fold and reach into at least 35 Australian cities.”

“Connecting to Australia’s first 5G network, customers who purchase the Galaxy S10 5G are at the forefront of this revolutionary technology”