After previously failing to make a mark in the Australian TV market, Bang & Olufsen is attempting a comeback with the reveal of the Beovision Harmony TV with rotating panel speakers. But will customers fork $30K for a television from an audio brand?

The Danish company warned last month that earnings and revenue are on track to decline in 2019, dropping three-year targets that had already been previously cut.

Bloomberg reports that despite shares in the company falling by about a quarter, and stock falling as much as 27% to a two-year low, Bang & Olufsen remain certain that there is a market for their high-end televisions.

The Harmony is the latest collaboration with LG Electronics, following the BeoVision Eclipse in 2017.

It features the same 77-inch OLED screen found on the LG C9 television, but which has an RRP of $15,999 — just over half of the Harmony RRP.

When not in the screen rests in its bracket either on the floor or mounted on a wall and once turned on, the screen rises up and the speakers roll out.

The speakers are the main feature here, as Bang & Olufsen are an audio brand first and foremost.

The rotating speakers offer a three-channel, fully active DSP-based sound system with a 7.1 surround sound decoder and can connect with up to either Beolab speakers. 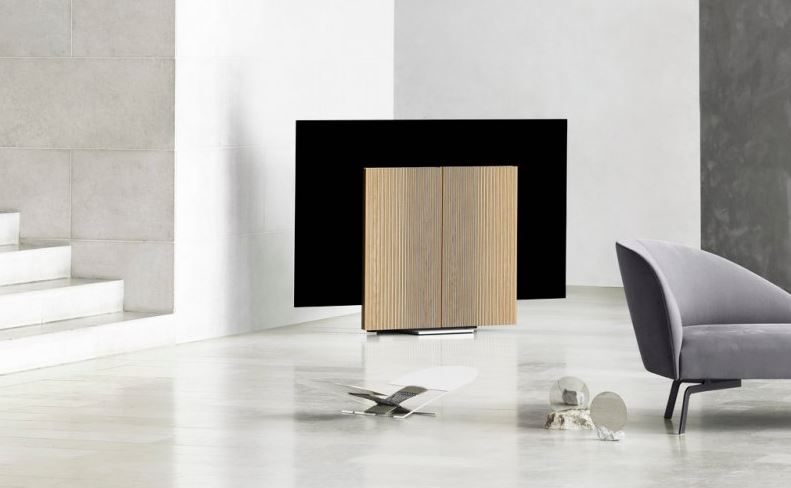 The statement television is integrated with Apple AirPlay 2 and has Chromecast and Bluetooth built in.

Following in the footsteps of LG’s rollable OLED and Samsung’s Frame, Bang & Olufsen is aiming to convert the television into a design piece as opposed to a black box in the corner.

However, it’s unclear if a stylish statement like this is enough to tempt consumers to spend close to $30K to enjoy in their home.

The Beovision Harmony is estimated to retail from 18,500 EUR (approx. $29,237 AUD) and is slated to be available in Bang & Olufsen stores starting October 2019. Specific local availability is yet to be confirmed.